On 17th September 2018, 360 Degree Recruitment was proud to be sponsor of the Weekend Women’s 36 hole 4somes Championships.

In perfect weather the teams of 6 players tee’d off at 7.30am to play the first 18 holes before taking a well earned break for lunch. Jenny Beake and Alison Lynch were leading by 5 strokes from Suzii Shen and Sally Watkins after returning a nett score of 72.5. Shen and Watkins were leading the gross event with 88.

After a delicious roast lunch the ladies headed out to do it all again in the afternoon to complete the 2nd 18 holes and bring in the Champions.

The turnaround of the day came from Robyn Murphy and Donna Nettle who scorched home from last after the morning round, with a nett 74 to come up just short of the eventual winners. Julie Lepp and Shonna Gobby put together two consistent rounds to win the Weekend Ladies Foursomes Championship with scores of 81, 76 – 157. Watkins and Shen held a nine stroke lead in the Gross event after the first round and despite having 15 more strokes in the afternoon, held on to win by one shot from Dana Slater and Deb Nowotny. 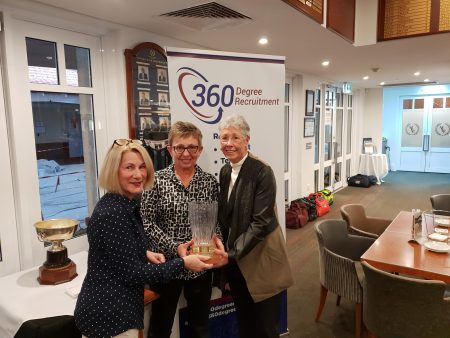